Navigating Success At Work and Home During the Pandemic

As the father of two young girls, Moneel Trivedi shares why he feels it’s so important to teach his daughters to be brave, how he’s managing the challenges of parenting during a pandemic, and why he’s found his calling as a Customer Success Manager at Okta.

While Moneel always had an interest in technology growing up, it was by good fortune he was guided into a career in IT.

“After uni, I didn't have much direction. I found myself working for a small business and I was supposed to be doing sales. But, one of the directors sat me in front of some coding books, and told me to learn this and practice. He clearly saw something in me.”

Moneel spent 10 years working in IT technical roles where he learnt the fundamentals of how technology works, which proved good grounding for his job today.

My biggest skill is dealing with people, but back then there wasn’t a role that married people skills and technology skills. You either went into sales or you became a deep techie.

It was the rise of software as a service (SaaS) in the early 2000s and the emergence of customer success management as a discipline that saw Moneel find his calling, commenting: “I realised I could have the best of both”.

When Okta, a provider of cloud software that enables identity protection, approached Moneel in 2018, he was excited about the opportunity. “The people, the company, the product and the growth opportunity we have, make it a great place to work.”

Moneel explains exactly what his role is a customer success manager:

“Ultimately, it’s about growing high-level post-sales relationships with customers, so they become partners and both our customers and Okta grow as a result. It’s a bit of project management, relationship management and technologist all rolled into one,” explains Moneel.

Teaching his daughters to be brave

A few years ago, Moneel became aware of gender inequality and stereotyping in the UK, and his own unconscious bias. He admits, “That’s quite late in your career to have that epiphany.” It was working for companies that focused on diversity and inclusion, as well as becoming a father of two girls, now aged five and two, that opened his eyes.

I remember listening to a TED Talk that was about the fact we teach girls to be perfect, we don't teach them to be brave. They quoted the stat that men will apply for a job when they have 60% of the skills, but women only apply if they have 100%. That was a real eye opener for me. I don't want my girls to be like that.

Moneel now encourages his daughters to be brave and make mistakes. “I know it’s cheesy but I quote one of the Batman films where someone says to Bruce Wayne: ‘Why do we fall? So that we can learn to pick ourselves up.’ And it’s so true! Every time you fail in life, the biggest thing is you learn. But you need to be allowed to fail in the first place.” 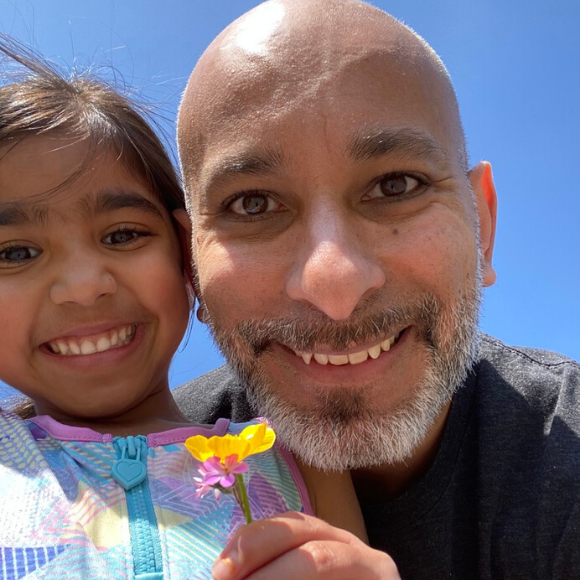 He’s also conscious about exposing his daughters to a wide range of subjects, so when they grow up they consider the full spectrum of career opportunities available to them.

“I want to give my daughters the knowledge to make informed decisions. Whether they want to become scientists, plumbers or homemakers, I’ll support them, but at least they’ve made the choice.”

Last year, Moneel and his oldest daughter Freya attended WORK180’s Super Daughter Day in London, at which Okta participated. The event was designed to help girls aged 5–12 explore the world of STEM (science, technology, engineering and maths) and meet female role models in tech. Okta’s stand had the girls creating identity boxes to encourage them to consider careers in STEM.

I thought it was an awesome idea and even more awesome that Okta was involved. We had a lovely day and although Freya’s only young, I think it’s good for her to be surrounded by girls partaking in those types of activities and seeing women from big organisations leading it.

The highs and lows of fatherhood

Moneel’s advice to new or expectant dads is to cherish the experience of fatherhood, have empathy for your partner and just do your best.

“It’s about being a team. Don’t underestimate your role as a father. You can have skin-to-skin contact with your baby, which is so beneficial. And just try to spend as much time as you can with your children in those first two to three years to create a bond. At times, being a parent is hard, but there are other times when you feel so much love and happiness, there is nothing like it. So just enjoy the ride - because it is a ride. It doesn't get easier, just the challenges change.”

Like everyone, parenting during the coronavirus pandemic has thrown plenty of new challenges at Moneel and his wife (who also works in technology).

“Having structure is very important,” he says. “I used to get stressed out about doing extra school work with Freya, but I’ve realised it’s such a blessing to have all four of us at home together. And actually, if we don't do all that homework, as long as they feel safe and loved, that's all that matters.

Try not to judge yourself, your partner or your kids. Things have changed and we just need to be nice to one another.

Living with an autoimmune condition, looking after his mental health and wellbeing is a priority for Moneel, dedicating time for meditation, a good sleep routine and running (he was supposed to compete in the London Marathon this year). Moneel believes he “couldn’t have been at a better workplace than Okta” during the pandemic. “They’ve been so supportive of working parents during this time. I count myself very lucky.”