How to change careers but stay with the same employer

When Flora Ofori first joined South Western Railway (SWR), which is part of FirstGroup, she was working on the frontline as a platform operator. This proved a stepping stone to her ultimate goal of landing a job in the HR team.

Now an HR Business Partner - Employee Relations, but covering the Talent and Succession Manager role, Flora shares her tips on how to transition between roles within the same company and why the railway isn’t a man’s world. 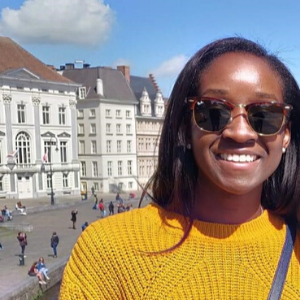 When Flora graduated from university with a Bachelor’s degree in International Business it was in the middle of the GFC.

Finding jobs at the time was hard! The recession really forced me to think outside the box. I said to myself, ‘Okay, how can I equip myself with additional skills to improve my job prospects?’

As a result, Flora made the decision to go back to uni and get a Master’s degree in International Human Resources Management, enticed by having a formal qualification.

“Once you have an HR qualification from an institution such as the CIPD no one can take it away from you, it's with you for life,” she explains. “HR also drew me in because there's lots of avenues to explore. You might start out in one branch of HR but could end up in another.” 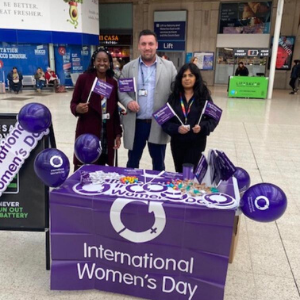 Transitioning from the frontline to behind-the-scenes

In 2013, while studying part-time for her master’s degree, Flora joined South West Trains, which later became SWR. Although it was the great employee benefits (e.g. free travel, final salary pension and retail discounts) that initially attracted her to work for the train operating company, it is the opportunity for career development that saw her stay.

I’ve seen loads of people start off in a customer-facing role and go on to become directors or senior leaders. There’s so much opportunity to develop and grow in this industry and I wanted a slice of that action.

This is why Flora’s number one tip for succeeding in the rail industry is to: “Always have a smile on your face and say hello to everyone because you don’t know who that person might be one day. They might be working on the platform dispatching trains today but give them a couple of years and they could be a senior leader within the business.”

During her uni days, Flora did a number of frontline roles, including working as a Rail Operator at Vauxhall, in the ticket office at Feltham and as a Duty Station Manager at Waterloo. But her goal was always to land a role in the HR team.

For anyone looking to change careers but stay with the same employer, she suggests the following:

I’m lucky in that SWR is filled with amazing people who really know their stuff, so I’ve always had informal mentors who would assist in guiding me through career hurdles and impart their wisdom. Working in SWR and the wider rail industry, there is such a strong focus on internal progression. You only have to look around you to see how many people have been promoted from within.

2. Seek out the advice of your HR team

The SWR Learning and Development team are amazing at pointing you in the right direction for what you need to do to get to the next level, whether that’s a qualification, mentoring or on-the-job shadowing.

3. Ask questions and challenge yourself to learn more

Even if you’re in an operational role, this is the perfect opportunity to gain the experience and knowledge needed to change jobs. You just need to be brave enough to push yourself out there, learn as much as you can and ask questions – I strongly believe there's no such thing as a silly question.

4. Be vocal about your aspirations and don’t give up

I applied for a number of HR roles, as well as the graduate scheme, and wasn’t successful at the time. But I always used the opportunity to make it known to the hiring managers that I was studying an HR degree and keen to get my teeth stuck into HR. I’d encourage everyone to believe in yourself and have a positive attitude. 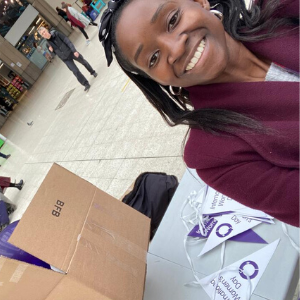 Flora’s patience paid off. In 2017, she was asked to fill a short-term role within the Employee Relations team. “I was like, yes, I’ll do it! Take me! Where do I sign up?”

She also found all of the frontline experience she had accumulated to be an advantage working in HR.

“All of the knowledge I had learnt in the ticket office or working on the platform helped bolster the HR knowledge I was starting to gain,” she says. “Experience is an amazing teacher.”

Now a permanent member of the HR team, what Flora enjoys most about her job is meeting new people and the challenges that come with the role, as well as the opportunity to celebrate women working in the rail industry.

“The railway is often seen as a man's world but that’s just not the case. It's for everyone. This industry embraces diversity like no other I have seen.

I would say to any woman, either wishing to join or to progress, to believe in yourself, never be afraid to ask for help and to grab opportunities when they arise. I only wish I’d applied to work in the rail industry sooner. 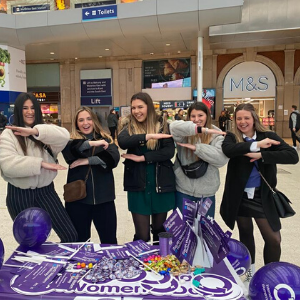 A career highlight of Flora’s was leading a project for International Women’s Day 2020 to encourage more women to consider a career in the railway.

I set up a stall at Waterloo Station and interviewed women across the network. It was really rewarding to share their stories, advice and why they joined the railway.

Another aspect of Flora’s role that she’s particularly proud of is her involvement managing SWR’s two development programs for women – the Step Up and Step Forward programs – , which are part of the FirstGroup Women’s Development Programme. The Step Up program is designed to get customer-facing women into supervisory and managerial roles, and the Step Forward program to help women already in management roles continue on a leadership pathway.

Often women start out in these programs thinking they aren’t experienced or equipped enough to take on next level roles. But by the end they realise that’s not the case. To see that change in their confidence and behaviour, it’s really rewarding!